On January 29, 1962, Babe Chaney founded Charles County Sand and Gravel Company, which also held a sizeable contract with Prince George’s County. Later that year, Babe and his son, Richard “Dickey” Chaney, founded the Charles County Concrete Company. Together, these two businesses formed the foundation for the company now known as Chaney Enterprises. When their father died of cancer in 1967, Dickey Chaney and later his younger brother Francis H. Chaney II, took the helm of the company. Dickey died of cancer in July 1999 and later that year, Frank turned the day-to-day management of the company over to current president and CEO William F. Childs, IV.

To celebrate its 50th anniversary, Chaney Enterprises, has been celebrating all year long with special events and celebrations for its employees, customers, suppliers, supporters and partners. As a thank-you for 50 years of support, the company created a film featuring interviews with company leaders and employees, some of whom were with Babe Chaney when the company got its start as a small contracting firm supplying gravel for Prince George’s County roads.  A summertime celebration that was hosted by the Chaney family and attended by hundreds of customers, friends, employees and their family members was capped off with a spectacular fireworks display.

As the company celebrates its many accomplishments, Chaney Enterprises recognizes that it’s just getting started and has more innovations and success stories to come. As it does today, Chaney Enterprises will continue to be the best it can be in the industry—for its customers, neighbors, team members and the environment. 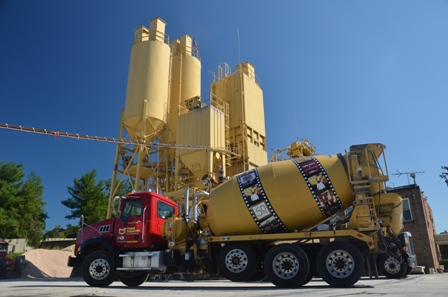 One of Chaney Enterprises’ newest mixers to its fleet displays images celebrating the company’s 50th anniversary.