Lawmakers Speak Out to Support Transportation as Job #1 Washington D.C. – Chaney Enterprises and Reliable Contracting Company joined hundreds of workers on the National Mall for the second annual “Rally for Roads,” the nation’s largest transportation funding advocacy rally on March 20, 2012. This one-day event promoted the importance of a fully-funded, multi-year transportation bill and the role it plays on stimulating the economy, maintaining the nation’s global competitiveness and above all, creating American jobs. Supporters on the podium included members of Congress and many trades associations committed to improving the country’s roads and bridges.

Among the many speakers was Sen. Barbara Boxer, D-Calif., chair of the Senate Committee on Environment and Public Works, who took to the podium and fired up the crowd. Boxer, who cosponsored Senate Bill Moving Ahead for Progress in the 21st Century (MAP-21) with Sen. James Inhofe, R-Okla., urged the House of Representatives to approve the bill. MAP-21, and passed by the Senate on March 14, in a bipartisan vote of 74-22. MAP-21 makes several key reforms, including program consolidation, statewide accountability for road conditions and upkeep, helping communities meet demand for walkable neighborhoods easily accessing employment, services and public transportation. The bill calls for $109 billion for the next 2 years, which according to Boxer is not perfect, but a good solid start toward long-term transportation funding. 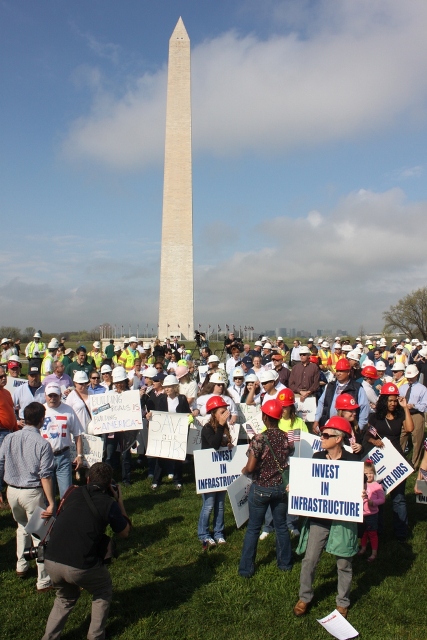 Chaney Enterprises and Reliable Contracting Company team members, along with some family and friends joined hundreds of workers on the National Mall preparing for the second annual “Rally for Roads.