Chaney Enterprises Receives Awards from ABC-Chesapeake and ACI of Maryland

Chaney Enterprises wins both the Associated Builders and Contractors - Chesapeake Chapter and the American Concrete Institute of Maryland Excellence in Construction Awards.

Chaney Enterprises is proud to have been recognized as the winner of the Specialty/Supplier and the Tilt-up Categories of these award programs for the quality concrete and superior service that was provided to the Tilt-up construction of the South Plaza Shopping Center in Lexington Park, Maryland. Chaney Enterprises' superior service allowed the contractor to exceed its goal of completing construction in 6 months, by finishing the project within 120 days.

Tilt-Up construction is one of the fastest growing industries in the United States because of the buildings attractiveness, energy efficiencies and longevity. At least 10,000 buildings enclosing more than 650 million square feet are constructed annually. Tilt-up Construction is the process of constructing concrete wall panels by casting slabs of concrete on the job site and then tilting the slabs up into their final vertical position with mobile cranes. Chaney Enterprises is proud to have worked on the South Plaza Shopping Center by delivering 3,533 yards of concrete without a rejected load. Once again, Chaney Enterprises delivered 100% customer satisfaction!

Howard Biel, Senior Managing Director of Faison, explained, "As owner and developer of this project, we are very satisfied with the teamwork and cooperation that took place among Faison and the architect, engineer, general contractor, concrete specialty contractor, and concrete supplier. As a customer who expects to be rewarded with competent, quality work, we received it from those who were involved with our South Plaza development, and thus we are very appreciative."

"Chaney Enterprises commends the generous effort our industry places on recognizing companies that have excellence as their pursuit. We are grateful for the reinforcement that tells us that the areas we find important are also important to our peers. Chaney Enterprises is proud to have been recognized by The Associated Builders and Contractors - Chesapeake Chapter and the American Concrete Institute of Maryland as being a quality producer and supplier of construction materials," stated by Bill Childs, President and CEO of Chaney Enterprises.

Chaney Enterprises employees receive an award from the Associated Builders and Contractors Chesapeake chapter. From left, Jeff Slagle of Chaney, an unidentified representative of Precision Concrete Construction and Jessica Gallimore of Chaney accept the award from Susan Taylor and Barrett Tucker. Tucker is the ABC chairman. 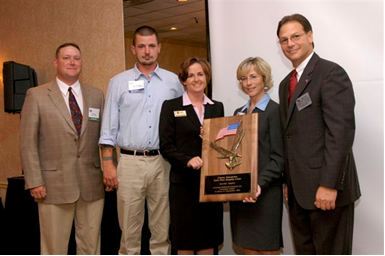