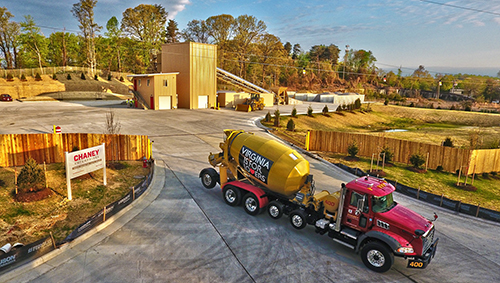 Over 5,000 years ago, the Egyptians were using the earliest versions of concrete. By 300 BC, the Romans moved a step closer to modern concrete with structures like the Pantheon which still stands today. The Romans used the first admixtures from animal products.
Modern concrete appeared with the invention of Portland Cement in 1824 by Englishman Joseph Aspdin. Concrete became more widely used and we still see structures such as the Alvord Lake Bridge (San Francisco, CA) constructed 1889 and the first American concrete street built in Bellefontaine, OH in 1891 standing strong.
Ingredients - Concrete is not Cement
Concrete is made of four key ingredients:
The raw materials are loaded from one of our certified concrete plants into a concrete mixer (not a cement truck) where is it mixed together and kept agitated until it arrives at the job site.
Environmental Stewardship
Concrete can measurably reduce energy use which helps the environment and your budget:
Durability
Decades of proven performance are the true measure of a street's worth. In community after community concrete meets this standard. America's first concrete street, built in Bellefontaine, Ohio, in 1891 is still in service today. Sioux City, Iowa, public records show their concrete streets last an average of 58 years before replacement and resurfacing. Durability literally stretches your budget and return on investment into decades. Over a 50 year period, concrete will have 1/3 fewer work zones, which not only saves money, but commuters’ time and can greatly decrease work zone accidents and fatalities.
Economic Responsibility
Aside from the costs savings from the environmental advantages, the durability of concrete means significantly less maintenance and rehabilitation. Additionally, because of its perishable nature before curing, concrete is locally produced at plants and employees that work and live in the area. Because asphalt is petroleum based, the combination of increased prices and enhanced refining capabilities limiting asphalt supply, concrete is able to be extremely competitive in initial costs in addition to all the lifecycle and other costs savings mentioned here.
Concrete is not only applicable in new construction of parking lots and roads, but also in resurfacing asphalt surfaces in a process called concrete overlays, or whitetopping. By using this innovative process that is being used across the country on everything from small parking lots to state highways, governments are saving money while being more green. This is an especially prudent application in intersections and other pavements where the flexible asphalt molds and ruts from the heavy starting and stopping of traffic.