Steven Tripp, marketing manager for Chaney Enterprises, was awarded “2007 Promoter of the Year” by the Maryland Ready Mix Concrete Association (MRMCA) on June 9. Tripp received the award during the Maryland Construction and Materials Conference in Cambridge, MD.

“What impresses me, as a full-time promoter, is that Steve challenged me to reach farther, be more competitive and think about an even ‘bigger picture’ to advance the concrete industry,” said Tom Evans, promotion director, MRMCA. In his remarks to Conference attendees, Evans noted Tripp’s ability to engage decision-makers during numerous trade shows; how Chaney Enterprises hosted several industry events at its locations; encouraged teamwork to promote industry partners and not just his company, how Tripp volunteered on his own time to advance the Association’s marketing campaign.

Tripp is a champion of Pervious Concrete, an environmentally friendly surface that allows water to run through the surface instead of ponding, offering storm water management options and for surfaces such as driveways and walkways constructed in critical water areas. He was recognized for his efforts and forward-thinking to introduce, educate and promote Pervious Concrete as a viable product, not only for Chaney Enterprises, but throughout Maryland.

“This recognition is well-earned and quite an accomplishment for someone who has only been in our industry since February of last year,” said Bill Childs, president, Chaney Enterprises. “Steve is truly a valuable addition to the Chaney team,” he added.

Tripp received a bachelor’s degree in Business Administration from the University of Massachusetts. Prior to arriving at Chaney Enterprises, he worked in the banking industry as marketing director for Andrews Federal Credit Union. 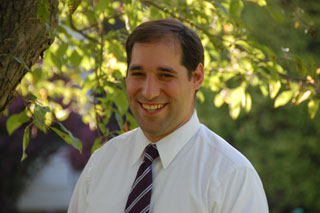 
Other news articles from June 2008