The American Concrete Institute (ACI) presented five concrete construction awards to Chaney Enterprises as the concrete producer for construction projects in the last year, an unprecedented recognition for a producer in a single year. The ACI recognizes the outstanding efforts of design and construction by members within the region’s concrete industry each year. Innovation, creativity and excellence in the use of concrete and concrete products are focus points.

“We are honored by this recognition and consider ourselves fortunate to have collaborated with so many leading industry partners on so many diverse projects,” said William F. Childs, IV, president and CEO of Chaney Enterprises. “Delivering quality is a team effort.”

Winning the Award of Excellence in Concrete Construction in the public buildings category was Regency Furniture Stadium, home of the Southern Maryland Blue Crabs. The 4,200-seat stadium in White Plains, MD was constructed in 9 months—ahead of deadline—and used 4,825 cubic yards of Chaney Enterprises concrete. The general contractor was Skanska USA Building, Inc., the concrete contractor Tobar Construction and the stadium was designed by architect Tetra Tech, Inc.

The Mirant power company’s chimney stacks at the Morgantown and Chalk Point power plants were named Excellence in Concrete Construction in the miscellaneous category. The new stacks are part of Mirant’s efforts to reduce emissions from the coal-fired plants. Over an 8-week period, Chaney Enterprises supplied 7,285 cubic yards of concrete which was poured continuously around the clock between two simultaneous power plant improvement projects. The structures were built by general contractor The Shaw Group, Inc., and concrete contractor Pullman Power, LLC. “Mirant is proud to receive this award for creative use of concrete in our environmental upgrades at the Morgantown and Chalk Point power plants,” said Jim Garlick, senior vice president of operations.  “Success of this project is due in part to the experienced and dedicated employees from Chaney Enterprises, Pullman Power, LLC and the Shaw Group, our contractors for this component of the project.”

The excellence award for architectural/decorative category went to the Kent Island Estate on the Eastern Shore.  The project was a large, insulated concrete form (ICF) custom-built home. Because of its unique and integrated construction, ICF walls are mold, mildew and fire-resistant. ICF structures retain structural integrity against high winds and earthquakes. And, ICF buildings conserve heating and cooling, providing twice the HVAC efficiency of conventional homes. The estate was designed by J. Mayer Architects. The builder was Visnic Homes and the concrete contractor was The Bartley Corporation and   Chaney Enterprises supplied the concrete.

The Wilson Bridge project received an excellence award from the ACI Metropolitan Chapter. This multi-billion-dollar expansion project began in 2002 and was managed by Potomac Crossing Consultants. The Maryland approach project contractors for the foundation were Tidewater Construction, Kiewit Construction and Clark Construction. Contractors for the structure and roads were Edward Kramer and Sons, American Bridge, and Trumbull Corporation. Chaney Enterprises and Aggregate Industries formed a joint venture to provide on-site concrete mixing and delivery during construction of the new bridge spans. 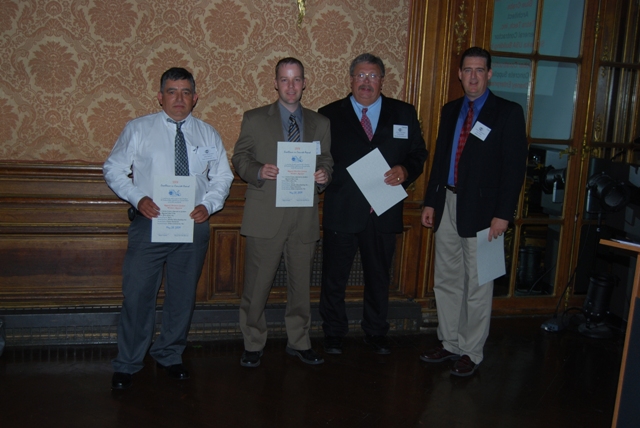