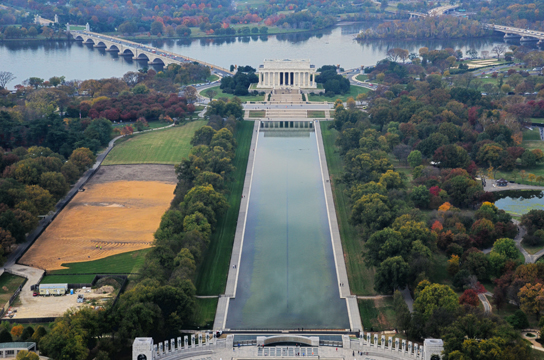 Chaney Enterprises provided over 2,000 tons of sand as part of the landscape portrait, “One of Many, One” (the English translation of the Latin motto E Pluribus Unum) that will be on display on the National Mall in Washington, D.C.

The six-acre exhibition, created by the Cuban-American artist Jorge Rodriguez-Gerada, began on October 1, 2014 and will slowly be dismantled through November.  Rodriguez-Gerada wanted to do a project on diversity so he photographed 30 men between the ages of 18 to 25 in Washington then combined them into one image.  In addition to the 2,000 tons of sand, the project called for 800 tons of topsoil, 10,000 wooden pegs, and eight miles of twine.  After the exhibit closes, the sand will slowly be incorporated back into the soil to assist with the turf restoration on behalf of the National Park Service.  The best way to see the facescape is from the top of the Washington Monument that is located between the National World War II and the Lincoln memorials.

This project represents Rodriguez-Gerada’s first landscape portrait in the United States as part of his Terrestrial Series.  His other large-scale facescapes can be found in Amsterdam; Barcelona, Spain; and Belfast, Northern Ireland.